The league season may be the obvious way to track a club’s success, but a calendar year might be a better method to track a club’s progress.  Many teams begin a league season with a host of new players who naturally take time to integrate with the squad and adapt to the team’s style of play. Usually in the early months of a season, managers will gradually incorporate new signings into their existing side. If we accept that by the halfway point in a league season, most clubs will have a settled team and system, it may be true to say that a team in January will have more in common in terms of unity and ability with the team that begins the next campaign than the one that started the current one.

Similarly managerial dismissals are more common in the first half of the season than in the second half. Of the current Premier League managers, nine were hired between August and December compared to only five between January and May. Managers tend to get closer to completing a calendar year than they do a league season, and a change in manager is arguably the biggest catalyst to a dramatic change in form. Therefore, judging a team’s average points-per-game over a calendar year rather than a league season should offer a better guide to their progress as a club, rather than simply their performance in a given competition.

I recently posted an article that analysed the progress of current English Premier League clubs over the past two years using average points-per-game as an indicator of performance (http://footballspeak.com/post/2012/01/03/How-Premier-League-clubs-2011-form-compares.aspx), and some people suggested they would be interested in the statistics for other European leagues. I haven’t attempted to analyse the data as my knowledge of other leagues is limited, but the results are below.

The tables show the clubs’ average points-per-game (PPG) achieved in the league in the last two calendar years across the five biggest European leagues. The Change column represents the difference between a team’s ppg between 2010 and 2011, while the % Change column represents the percentage difference. A team with positive change will have improved in 2011 from the previous year, whereas a team with a negative change will have declined during the same period. Each league is ordered by the points-per-game earned in 2011, and so reflects how the league would look over the calendar year.

Naturally newly promoted sides have no comparison with 2010 unless they were relegated in the 09/10 season. To use their performances in the lower divisions would be flawed due to the obvious difference in quality. Their points-per-game for 2011 is still listed, but it should be noted this is only based on roughly the number of games played by the other teams. Similarly teams that were newly promoted in the 10/11 season have a smaller sample of games in 2010. 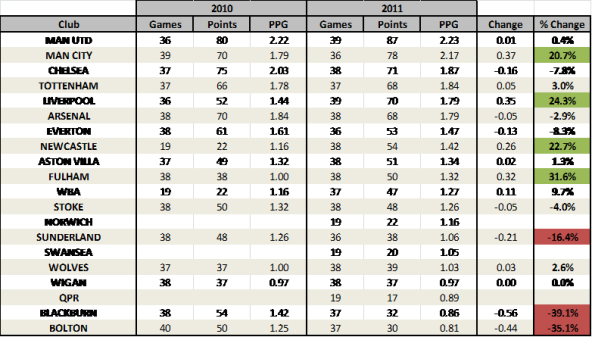 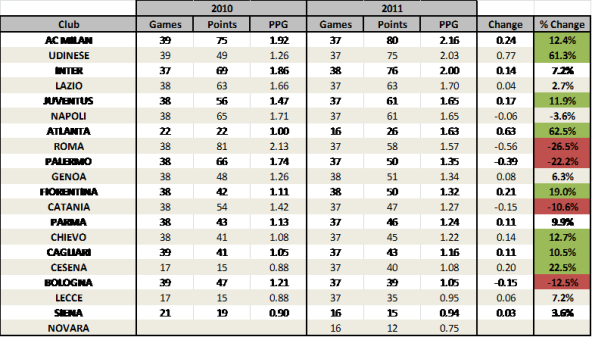 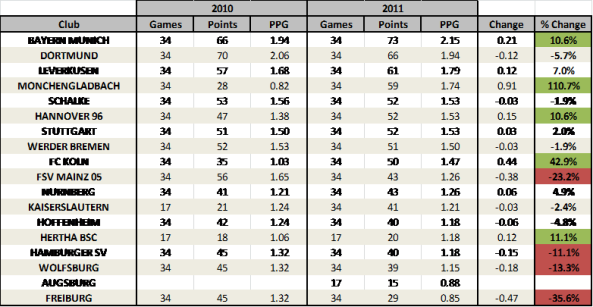 No club has declined to the same extent, but some have given it a good go. Steve Kean will be pleased to know that his efforts have resulted in Blackburn achieving something – they are the worst performers across the five divisions when compared to their 2010 form. In 2011 Blackburn’s points-per-game average declined by a wretched 39.1%. Not far behind are Getafe (-36.7%), Freiburg (-35.6%), Bolton (-35.1%), Villarreal (-33.6%) and Stade Brest (-30.4%).  It will surprise nobody that both Freiburg and Villarreal have sacked their managers since the beginning of the season.  It will surprise everybody that Blackburn haven’t.

If anybody wishes to use these tables for an article, please message me on Twitter (https://twitter.com/nasher3230) and I will be happy to send you the Excel file.

Error: Twitter did not respond. Please wait a few minutes and refresh this page.