Tottenham’s victory over Everton left them level on points with Man Utd and three points off league leaders Man City, confirming their position as genuine title rivals to the Manchester clubs. Much has been made of the additions of Scott Parker and Emmanuel Adebayor as a reason for the club’s success, but the biggest change since last season has been the use of their wingers, Gareth Bale and Aaron Lennon.

Since the arrival of Rafael Van der Vaart, manager Harry Redknapp has favoured a 4-4-1-1 formation, playing the Dutchman behind a lone striker and a flat midfield four. Bale and Lennon stayed wide as traditional wingers, running at the opposing full backs and looking to deliver crosses from the byline rather than attack the penalty box. As a result, Tottenham relied heavily on Van der Vaart to support the lone striker.

Fortunately for Spurs, Van der Vaart had an excellent season, scoring 13 goals and made 9 assists, compared to just 10 goals and 3 assists between Bale and Lennon. However, his importance can be demonstrated by the statistic that Spurs averaged 1.75 points-per-game in 2010/11 with Van der Vaart in the side compared to just 1.30 without him. Redknapp seems to have identified this reliance as a weakness and has given his wide players the freedom to roam across the pitch and provide greater support to his lone frontman in central areas.

The graphics below (from ESPN Soccernet’s Gamecast) show the average position of Tottenham’s players in games against the same opponent from this season and last, and show clearly how both Bale (#3) and Lennon (#7) have adapted their game for the team. 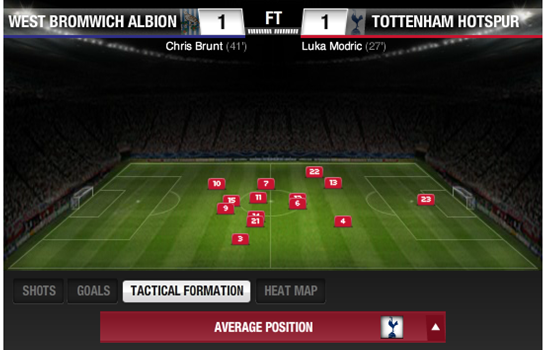 Tottenham away to WBA in 2010/11. Notice how wide Bale and Lennon play. 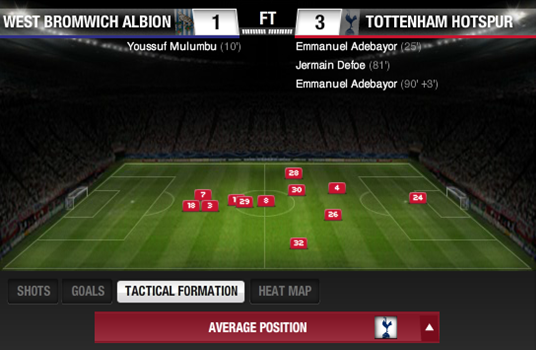 Tottenham away to WBA in 2011/12. Bale and Lennon’s average position is now central, suggesting the players swapped wings often, and much more advanced. 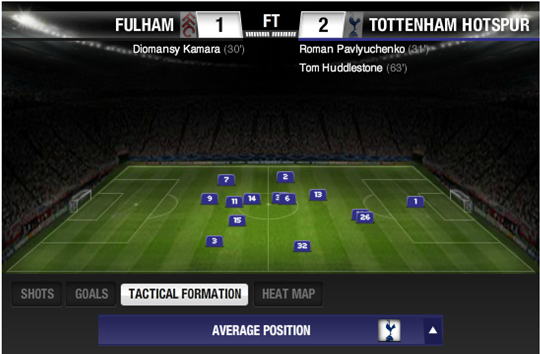 Tottenham away to Fulham in 2010/11. Again Bale and Lennon play wider, a long distance from the lone striker Roman Pavlyuchenko (#9). 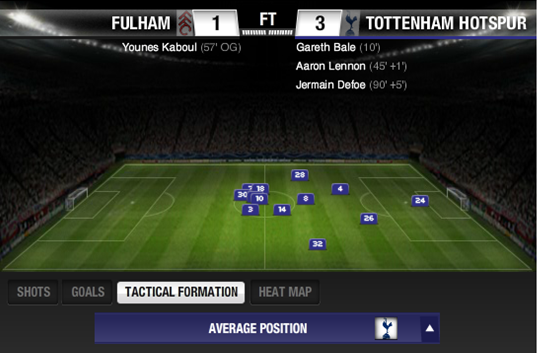 As a result of this tactical change both Bale and Lennon have become much more involved in Tottenham’s attacking play and has resulted in the two wingers becoming more productive.

The table below shows the games played by the three players mentioned (starts and sub appearances), and their goals and assists for the 2010/11 and the 2011/12 seasons. The Gl/Gm and Ass/Gm columns represent goals per game and assists per game respectively. The Team Gls column shows the number of goals scored by Spurs with the player on the pitch. Finally, the % Team column shows the percentage of Tottenham’s goals each player was involved in (either scored or assisted).

The team’s reliance on Van der Vaart in 10/11 is reflected by him being involved in 53.7% of Tottenham’s goals, while Bale (17.8%) and Lennon’s (11.1%) contribution is much smaller. This season however, Bale and Lennon have scored and created more, demonstrated by their increase in goals and assists per game, and this has resulted in them being involved in more of Tottenham’s goals. Bale now leads the way with an involvement in 35.1% of the team’s goals, while Lennon has improved to 23.8%. Clearly Tottenham are no longer as reliant upon Van der Vaart for goals.

Another result of Bale and Lennon’s new freedom has been their development as players. With both of them playing as traditional wingers last season there were doubts about how they could adapt to other formations, in particular as part of a front-three. Clubs that had shown an interest in Bale, like Barcelona and Inter, saw him as an option at full back rather than further forward, while Lennon has never been considered as part of a front-three for England. This season they have demonstrated movement, positioning and creativity that wasn’t previously obvious and have been a major factor behind Tottenham’s progression to title challengers.

Error: Twitter did not respond. Please wait a few minutes and refresh this page.